What do the current cases of Theranos, Valeant or Quindell have in common? They are all examples of potential “fraud”. Although the number of such cases is rising in Germany – e.g. Volkswagen, S&K or P&R, to name but a few – this area of law is still rather under-lit in the German Mittelstand (in contrast to the anglo-american legal system), as the following anecdote may illustrate:

As part of a compliance event, one of the speakers asked the auditory if the so-called “Fraud Triangle” was known. From the perhaps one hundred participants only three or four reluctantly raised their hands. If this basic knowledge is lacking even within an expert audience, my very own conclusion was, how should a medium-sized business manager even recognize fraud in his own company or committed by one of his customers or suppliers? Reason enough to present some basics of this area.

As noted at the beginning, although the concept of “fraud” is generally known,  outside the world of prosecutors and defense lawyers no one was interested in this area of law in Germany until 20 years ago. The scandals that have always existed, such as  Balsam or Flowtex, have been cleared (or not) by state law enforcement agencies, and life has continued. By contrast, in the USA, a sector of private prosecution was formed early on. This was also partly due to the fact that companies that were conducting so-called “internal investigations” and shared their findings with the public prosecutor’s office, were able to at least minimize the horrendous penalties and claims for damages. However, with the Siemens scandal in the mid-2000s American conditions – in the truest sense of the word – began to enter German criminal investigations. Well-known US law firms were commissioned by the US Securities and Exchange Commission (SEC) but on behalf of Siemens to investigate the scandal. Even in the current diesel scandal, Volkswagen is under investigation under similar constellations by a US law firm.

Due to the chronic overburdening of the public prosecutor’s offices, the use of private investigators and lawyers for the purpose of investigating crime (so-called “forensic services”) and retrieving assets (so-called “asset tracing” and “asset recovery”) has finally arrived also in the famous German Mittelstand. Problematic, however, is that the companies, figuratively speaking, often close the “gate after the bull has already escaped.” Hence, such investigations are often commissioned only after the prosecutor has already – again figuratively speaking – entered the farm.

This brings us back to the initial question – what concerns me (as manager, shareholder, entrepreneur of a medium-sized company) “fraud” at all? Very much, so the short answer. The somewhat longer answer is given by various statistical surveys on this topic:

While white-collar crime statistics are treated rather marginally in the police crime statistics, the respective statements in the German Federal Office of Criminal Investigation’s Intelligence Summary on White Collar Crime for 2017 (“BKA Bundeslagebild Wirtschaftskriminalität 2017”) are more than revealing:

A study undertaken by KPMG assumes that more than one out of every three companies surveyed were affected by white-collar crime (36%) from 2014 to 2016, and nearly half of all large companies(45%). According to a PwC / University Halle Wittenbergstudy on white-collar crime, 40% of companies reported that they were at least once the target of a so-called CEO fraud attack within the past 24 months – in five percent of the cases the criminals were successful.

But also economic espionage is likely to increase in the future: For example, Corporate Trustreports that loss of know-how through espionage or other outflow of information remains a major problem for German companies. Only less than half of the companies (45.3%) were able to confirm that their company did not fell victim of such an incident in the last three years. In 29.1% of the cases, there was a concrete loss of know-how; in 25.6% of the cases, a loss could not positively be confirmed and and therefore probably did not have sufficient instruments implemented in order to even detect a spy attack.

Relevance for the German Mittelstand

Even a layman can relatively easy deduce from this handful of statistical data that white-collar crime is a comprehensive phenomenon of economic activity which might hit each company with varying severity – and thus can lead to an economic crisis of the company. A thorough analysis of this phenomenon is therefore part of the duty of each manager.

In addition thereto, managers of corporations with international business relationships should also be aware of the United States Foreign Corruption Practices Act (FCPA) and Britain’s Bribery Act. Both Anglo-American systems tend to assume their jurisdiction even at low points of contact with the respective legal system – and to pronounce severe penalties for misconduct.

Even though the deliberations on the introduction of corporate criminal law in Germany are (again) relatively at the beginning (cf. here (in German)), the punishment of criminal offenses by the misdemeanor law can also lead to severe fines, such as in the aforementioned Siemenscase with a fine of Euro 395 million effective (cf here (in German)).

To round-off this brief overview, I come back to the aforementioned so-called “Fraud Triangle” unknown to many compliance officers. Managing directors should develop a basic understanding of the mentality of “fraudsters” in order to better recognize warning signs for corporate criminal activity. The r elatively simple scheme  of the “Fraud Triangle” presents a simple aid to this aim. Frequently used in practice, it was developed by Donald R. Cressey already back in 1953: 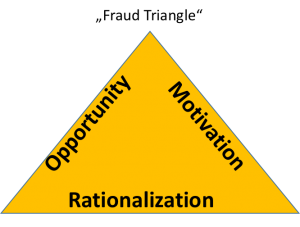 Opportunity: is the fundamental opportunity to commit a criminal act without being caught.

(Inner) Rationalization: The perpetrator can uphold his self-image as a “righteous member of society” in front of himself through inner justification. Typical examples are “I only borrow the money” or “The boss did not deserve better”.

White Collar Crime and especially fraud is much more common in the German Mittelstand than generally anticipated.

If the manager discovers signs for economic crimes committed in the company, he may be able to use the fraud triangle to find clues about the perpetrator and / or the course of action. In such a case he should immediately take (documented!) steps to clarify the situation in order to avoid or at least reduce the damages caused.