I started my professional career in 1996 in corporate insolvency law and insolvency administration. From the start on, though, I was rather interested in saving companies than merely liquidating them. In the following years I therefore specialised in the operative and financial restructuring of companies in addition to my legal skills. Since 2013 I am certified as a Certified Turnaround Professional (EACTP) and since 2014 I am a partner with management consulting firm CIC Consultingpartner GmbH.

During my professional career I further developed an expertise in forensic services, since crimes were the original trigger to the crisis of several of the turnaround cases I dealt with.

The basis for the aforementioned focus lies in my sound education and experience in general business law, in particular in commercial and corporate law.

Already due to the time pressure, my involvement ususually does not stop with the presentation of a theoretical solution, rather I focus on the execution of the mutually agreed strategy. Therefore, I am not limited to mere counseling, but I also take operational responsibility, e.g. as a managing director. Often, companies also use my competence to prepare for crisis scenarios or for preventing a crisis altogether.

From the beginning, I advised clients in an international context, be it German companies regarding legal issues abroad, be it foreign companies in Germany. The focus of my international activity lies in the USA, England, France, Switzerland and Austria. Based on my international work over the years and active membership in several (international) organizations, for example in the respective chapters of the Turnaround Management Association in Germany and the UK, I can draw on a widespread international network.

Seldomly, the mere answering of legal questions or drawing-up of concepts actually solve problems. Rather, the agreed solutions must be implemented in a practical manner. That is why, in appropriate cases, I also assume operational responsibility for the implementation of concepts, whether as managing director, board of directors or supervisory board (advisory board), trustee, self-administrator or liquidator in the case of disinvestments.

Corporate crises goes through various stages as shown in the diagramm below – and not every crisis is life-threatening. At each level the crisis may be averted with particular measures fitting the respective level. However, in order to overcome the crisis as a whole, it is necessary to resolve it on each level in reverse order. As the crisis proceeds from one level to another, the pressure increases while the actual possibilities to act diminish. This starting point differs greatly from other problematic situations that might occur in enterprises. Hence, an approach merely focusing on legal advice will therefore not suffice to solve the corporate crisis. Rather, an understanding of commercial needs, the ability to lead and personal assertiveness are required in order to master the crisis. 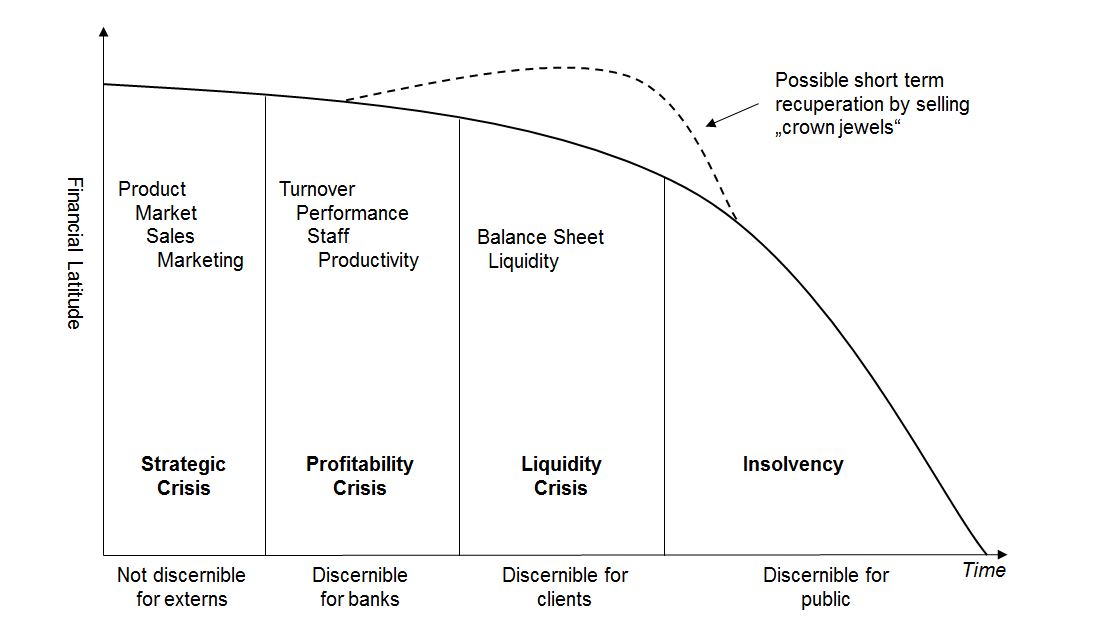 In the roughly twenty years I spent in this industry, I acted on every level of a crisis and took the position of every possible stakeholder in such a situation, e.g. the role of the “acting insolvency administrator” (“Schattenverwalter”), counsel to the enterprise or advisor to creditors. I have rescued businesses in or outside of insolvency.

Against this background, I regularly advise entrepreneurs and enterprises on the avoidance of insolvency, on liability risks or the commencement of an insolvency procedure. In addition to the “classic” means to restructure in insolvency, namely through the implementation of a so-called insolvency plan or through the transfer of assets to a new entity (“übertragende Sanierung”), I regularly advise on new innovative methods like trust-constructions or a debt-to-equity-swap. Also, I have a large experience of turnarounds in an international context. I advised on English schemes of arrangement as well as on Chapter 11 procedures under US-law, to name but a few.

Finally, I regularly advise foreign creditors on their entitlements in German insolvency proceedings, in particular regarding the commencement of such proceedings, the enforcement of claims or the avoidance of claims.

Quite frequently in the context of a crisis, but not limited to such extraordinary circumstances, companies engage me to investigate in cases with a potential criminal background, to instruct and to coordinate with the law enforcement authorities and to pursue damages and recover lost assets. In the last years, the work in this area mostly concerned investigations into fraud and corruption in SME’s. In some of these cases I was able to resolve the financial crisis through the recovery of substantial assets.

According to the motto “the best crisis is the one that never happens”, I try to pass on the lessons learned from the numerous corporate crises I have encountered in such a way that companies can proactively prepare themselves for a crisis, i.e. become more resilient. Many measures are conceivable, starting with a company-adequate early risk detection system and suitable measures to secure liquidity, through to the conception and implementation of internal processes for customer-screeing (“Know Your Customer”).

Commercial law is the basis of business law. Quite frequently I advise clients in this area of law: For example, the re-financing of companies always leads to issues related to corporate law, e.g. on how to execute a reduction of the companys capital. Furthermore, I have a large experience in incorporating companies and was also repeatedly involved in the resolution of shareholder disputes.

On a regular basis I advise investors and shareholders, e.g. insolvency administrators, in the transfer of enterprises in crisis and insolvency. Especially the acquisiton of distressed companies might prove to be highly lucrative. However, the purchase of a company in crisis or insolvency is one of the most complicated possible – not only from the legal point of view. There are, for example, certain habits and customs to be observed when dealing with an insolvency administrator. With this background I am also regularly engaged to represent parties in M&A transactions outside of a crisis.

Quite often, the successful assertion of legal entitlements is essential for the company’s business success – equally often, though, the success in court does not seem to be foreseeable.Therefore, I prefer to negotiate a settlement instead of formal legal proceedings. However, if I cannot prevent litigation, I have the experience to assert legal entitlements before German courts and to enforce these titles. Based on my longstanding work for large insolvency administrator firms, I have an extensive knowledge and expericence regarding avoidance and liability claims.